A fire possibly sparked by squatters caused an estimated $150,000 worth of damage to a vacant building in Lincoln Park Thursday.

The non-injury blaze in the 300 block of 47th Street erupted shortly after 9:30 a.m., according to the San Diego Fire-Rescue Department.

The personnel had the flames under control within 20 minutes.

Investigators, who suspect that the fire was ignited by transients, set the monetary losses at $100,000 to the single-story building and $50,000 to contents, Munoz said. 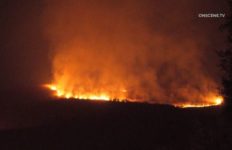