Former Los Angeles Unified School District board member Jackie Goldberg took the majority of the votes against former teacher and mayoral aide Heather Repenning in Tuesday’s runoff election for the Board of Education.

Repenning conceded the race shortly before 11 p.m. Tuesday, when the still unofficial count showed Goldberg ahead by a wide margin: she’d garnered 71.62% or 17,218 votes, with all precincts reporting; Repenning’s tally was 28.38%, or 6,824 votes.

Voter turnout represented just 7.69% of those eligible to cast a ballot.

United Teachers Union Los Angeles (UTLA) representatives didn’t wait for the official results before issuing a statement regarding what they called “a decisive victory” and praising Goldberg’s ”long and storied history of fighting for students, standing with educators and partnering with parents to support our schools.”

Goldberg and Repenning were vying to join the seven-member Board of Education, which has a seat left vacant by the resignation of Ref Rodriguez, who stepped down last July after pleading guilty to conspiracy and other charges for laundering campaign donations from family and friends.

In the March 5 primary election, Goldberg fell just short of the 50% majority vote needed to avoid a runoff. Since she fell short of the mark, she had to face the second-place finisher, Repenning, in Tuesday’s runoff election.

Goldberg — a former teacher, LAUSD board member, Los Angeles City Council member and Democratic state legislator — was heavily backed by UTLA. The union poured money into Goldberg’s campaign, hoping to undo a board majority that generally favored expansion of charter schools in the district.

Rodriguez’s departure left the board with a perceived 3-3 split on the issue, and a Goldberg victory swings the panel back in UTLA’s favor.

In her campaign, Goldberg touted her experience on the board.

“I’m running to be a strong progressive voice on the board who will put the interests of the students first, and as someone who will not have a big learning curve when elected,” according to a statement on Goldberg’s campaign website. “I believe my experience and passion for helping students will be a steadying force on a board that continues to face turmoil.”

Repenning, a former teacher and aide to Los Angeles Mayor Eric Garcetti, had the backing of Garcetti and several City Council members, along with a host of labor unions.

Repenning told CNS that LAUSD schools are “not currently set up to meet the challenges facing the many students whose families are living in poverty, 80% of which qualify for free and reduced lunch. “Many of our families have enrolled their kids in charter schools which are not subjected to the same level of transparency and accountability as district schools, and many union jobs have been lost in this process.”

Goldberg Takes Over 70% of Votes for LAUSD Board Seat; Opponent Concedes was last modified: May 15th, 2019 by Contributing Editor 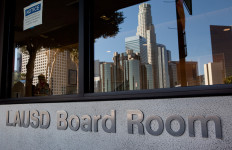