Voters turned out in unexpectedly high numbers this weekend for early voting in six Los Angeles County locations, and officials said some polling places had long lines forcing waits of up to two hours.

Early voting continues throughout this weekend at those six Los Angeles County locations.

The hours are 8 a.m. to 4 p.m. and County election officials are warning people to be prepared for long lines and mark their sample ballots in advance.

Last weekend a total of 7,756 early votes were cast — split nearly evenly between Saturday and Sunday.

“We are encouraged by the turnout at the early voting locations and appreciate the patience and participation of Los Angeles County voters,” said Registrar-Recorder/County Clerk Dean Logan. “It is clear that voters desire the option of in-person early voting in addition to vote by mail and Election Day in-precinct voting.”

The highest turnout was in North Hollywood, where 1,831 votes were cast. Other new polling places are in West Covina, Culver City, Lancaster and Torrance in addition to the Registrar-Recorder’s Office in Norwalk.

Logan offered no detail on the breakdown of those early votes.

He did highlight the county’s efforts to modernize its voting system.

“While our current voting systems in California limit early voting options, the activity observed over the weekend validated the importance of moving to a more flexible and responsive voting model,” Logan said.

Additional information about voting in Los Angeles County for the Nov. 8 election or dropping off a vote by mail ballot is available at lavote.net.

Issa, Who’s Suing Over Absentee Voting, Used it Himself 16 Times→ 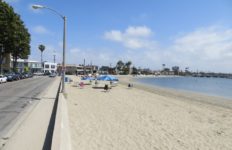