The library destined to replace Riverside’s existing downtown repository will feature modern attractions intended to draw residents from all walks of life — and bear a design that can change over time, city officials said Friday.

“Modern day libraries not only spur a love of reading and provide all of our children with access to the Internet, but they also spur interest in technology and the crafts, and provide job seekers and entrepreneurs with resources for success,” said Mayor Rusty Bailey. “They offer valuable public spaces for community building and life-long learning.”

The Riverside City Council on Tuesday voted 5-1 — with Councilman Chuck Conder opposed and Councilman Andy Melendrez abstaining — in favor of the $39.69 million Main Library Project, slated for completion in 2020 at 3911 University Ave.

“This project is going to improve the quality of life for Riverside residents, while simultaneously setting the stage for a major economic development project,” Councilman Jim Perry said. “The fact that we are accomplishing this on the site of an old bus station that frequently generated complaints from nearby residents is a huge bonus.”

The 42,329-square-foot library will be elevated, featuring an arcade platform beneath it where visitors can gather for readings, book signings, or just relax outdoors, according to officials.

The site will have space enough for the library, as well as a mixed-use development for commercial or residential purposes that the Riverside Economic Development Department will be studying further.

The library will include meeting and community rooms, archival space, a sound recording studio, online databases, a 3D printing area, a special collections inventory and hookups for all modern devices.

“The new Main Library will offer 21st century resources and services to cultivate and support the community’s educational and personal goals,” Library Director Tonya Kennon said.  “A maker-space and business incubator, and the lending of `things,’ such as toys and tools, will be offered alongside traditional print materials.”

According to planners, the three-story complex will be erected in a way that leaves room for add-ons and modifications in the future.

The existing library at Mission Inn Avenue and Orange Street, directly across from the Mission Inn Hotel & Spa, is slated to be converted into the Cheech Marin Center, sporting Chicano sculptures, paintings and photographs collected by comedian Richard “Cheech” Marin over the last 30 years.

That project will cost an estimated $7 million, all of which is being raised privately, without municipal funds.

According to the Riverside Art Museum, the building will house more than 700 works by a variety of artists. 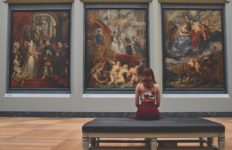