The Los Angeles County Board of Supervisors voted unanimously Tuesday to explore options for regulating firearms, including restricting sales to anyone under 21, banning .50-caliber handguns, strengthening safe storage laws and prohibiting gun sales near schools.

“This is a very important motion to me and, I think, to many others who have contacted us after yet another mass shooting in this country,” Kuehl said. “A lot of people have said what can we do, what can we do?”

Kuehl said she believed the motion, co-authored by Supervisor Mark Ridley-Thomas, was an answer of sorts.

It calls for a review of four regulations that have already been successfully implemented by other California counties and cities and were cited in a 2017 county report requested in the wake of the 2015 terror attack on San Bernardino County employees.

Supervisor Janice Hahn asked that the review be expanded to consider a ban on assault weapons and a law to prevent individuals on the federal no- fly list or convicted of domestic violence crimes from owning weapons.

The motion also directs county staffers to develop a prevention plan that looks beyond guns to include other forms of violence, such as elder abuse, child abuse and domestic violence. Current county efforts are marked by a lack of coordination between departments, according to the motion.

“We put a lot of money into treating trauma … (and) medical treatment … (and) the results of violence,” Kuehl said. “We do not, as yet, invest very much in prevention.”

Ridley-Thomas said the issue of gun violence is bigger than the headlines that follow tragic mass shootings, noting that more than 30,000 Americans die every year from gunshot wounds.

“My view is we have no choice but to do this,” Ridley-Thomas said.

Many advocates of gun control turned out in support.

“We need to stand up to the NRA,” said Jenna Schwartz of Moms Demand Action. “We need to stop trying to put band-aids on bullet holes.”

Members of Moms Demand Action described the nonprofit as a national, nonpartisan, grassroots effort with 5 million members seeking to implement common-sense gun laws. They and others urged the supervisors to be proactive, rather than reactionary, and to also focus on factors underlying gun violence, including domestic abuse, racial inequities and uneven criminal sentencing.

Supervisor Kathryn Barger said she agreed with the motion’s “critical safeguards,” adding, “Our families should not have to be afraid to send their children to school.”

However, Barger also believes California laws aimed at regulating guns and ammunition lack strict enforcement and run contrary to legislation that modifies sentencing requirements for violent felonies committed using guns. She asked that the review include a look at options to resolve legal inconsistencies.

A senior from Palisades Charter High School invited the board to join school walk-outs planned across the country Wednesday.

“Not for thoughts and prayers, but for policies and change,” Amir Ebtehadj said. “We are the future … we will change the world.”

LA county board votes to take a look at tighter gun restrictions was last modified: March 13th, 2018 by Christina Kelley 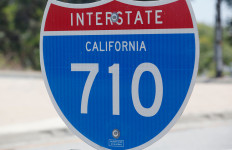 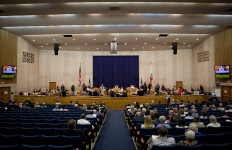 County board to strengthen program that prevents school shootings→