Comedian/actor Louis C.K. broke his silence Friday about the sexual misconduct allegations against him, admitting that the accounts of five women interviewed in a New York Times story this week are true.

The fallout was swift, with FX Networks ending its professional relationship with him and a film distribution company scrapping plans to release his new movie.

The women alleged that he either masturbated in front of them, asked if he could do so or did it while on the phone.

“I want to address the stories told to the New York Times by five women named Abby, Rebecca, Dana, Julia who felt able to name themselves and one who did not,” Louis C.K. wrote in a lengthy statement released to media Friday.

“These stories are true,” the statement continued. “At the time, I said to myself that what I did was okay because I never showed a woman my (genitals) without asking first, which is also true. But what I learned later in life, too late, is that when you have power over another person, asking them to look at your (genitals) isn’t a question. It’s a predicament for them. The power I had over these women is that they admired me. And I wielded that power irresponsibly.

I have been remorseful of my actions. And I have tried to learn from them. And run from them. Now I’m aware of the extent of the impact of my actions. I learned yesterday the extent to which I left these women who admired me feeling badly about themselves and feeling cautious around other men who would never have put them in that position.

I also took advantage of the fact that I was widely admired in my and their community, which disabled them from sharing their story and brought hardship to them when they tried because people who look up to me didn’t want to hear it. I didn’t think I was doing any of that because my position allowed me not to think about it.

There is nothing about this that I forgive myself for. And I have to reconcile it with who I am. Which is nothing compared to the task I left them with.

I wish I had reacted to their admiration of me by being a good example to them as a man and given them some guidance as a comedian, including because I admired their work.”

The comedian, writer and producer went on to apologize to his many colleagues.

“The hardest regret to live with is what you’ve done to hurt someone else. And I can hardly wrap my head around the scope of hurt I’ve brought on them. I’d be remiss to exclude the hurt I’ve brought on people who I work with and have worked with whose professional and personal lives have been impacted by all of this, including projects currently in production: the cast and crew of Better Things, Baskets, The Cops, One Mississippi, and I Love You Daddy. I deeply regret that this has brought negative attention to my manager Dave Becky who only tried to mediate a situation that I caused. I’ve brought anguish and hardship to the people at FX who have given me so much, The Orchard who took a chance on my movie, and every other entity that has bet on me through the years. I’ve brought pain to my family, my friends, my children and their mother.

I have spent my long career talking and saying anything I want,” the statement continued. “I will now step back and take a long time to listen.

Thank you for reading.”

The Orchard, an independent distribution company, announced Friday that it will not release Louis C.K.’s just-completed film, “I Love You Daddy.” The film was written and directed by Louis C.K., who also stars as a TV writer whose 17-year-old daughter becomes romantically involved with a much older filmmaker played by John Malkovich. It had been scheduled to open in select cities, including Los Angeles, on Nov. 17. Its future is now uncertain.

FX Networks and FX Productions officials, who said Thursday that they were reviewing the allegations against Louis C.K., announced Friday that they are ending their relationship with him.

“Today, FX Networks and FX Productions are ending our association with Louis C.K.,” their statement said. “We are canceling the overall deal between FX Productions and his production company, Pig Newton. He will no longer serve as executive producer or receive compensation on any of the four shows we were producing with him — Better Things, Baskets, One Mississippi and The Cops.

Louis has now confirmed the truth of the reports relating to the five women victimized by his misconduct, which we were unaware of previously. As far as we know, his behavior over the past 8 years on all five series he has produced for FX Networks and/or FX Productions has been professional. However, now is not the time for him to make television shows. Now is the time for him to honestly address the women who have come forth to speak about their painful experiences, a process which he began today with his public statement.

FX Networks and FX Productions remain committed to doing everything we can to ensure that all people work in an environment that is safe, respectful and fair, and we will continue our review of all of these productions to ensure that was and is the case.”

In addition to the four shows mentioned in the statement, Louis C.K. starred in the hit FX series “Louie,” a somewhat-autobiographical comedy that hasn’t aired an episode since 2015.

Netflix officials also announced Friday that they will not go ahead with the second of two planned standup specials by the comedian.

And Thursday, HBO announced it was dropping the comedian from its upcoming “Night of Too Many Stars” benefit show scheduled for Nov. 18. The cable giant also announced it is “removing Louis C.K.’s past projects” from HBO on-demand services. 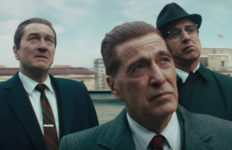