City and Navy officials gathered at the Port of Los Angeles Wednesday to officially begin the annual L.A. Fleet Week by welcoming vessels that will be available for public tours during the holiday weekend event.

In addition to the retired battleship USS Iowa, which is permanently moored at the LA Waterfront, three other military ships will be docked in the harbor and available for public tours — the USS Scout mine-countermeasures ship, the USS Dewey guided missile destroyer and the HMCS Ottawa, a Royal Canadian Naval frigate.

Mayor Eric Garcetti, City Councilman Joe Buscaino and a pair of U.S. Navy admirals were on hand Wednesday morning to welcome the arriving ships to the harbor and celebrate the upcoming events designed to give residents an up-close look at Naval operations.

“That’s what Fleet Week is all about, connecting people and making sure that we make it not just a week of our lives, but throughout the year we support the United States Navy and Coast Guard with our strongest efforts,” Garcetti said.

Fleet Week public events officially begin Friday and continue through the Labor Day weekend. The event will include not just tours of the vessels, but military exhibits and displays, aircraft flyovers, musical entertainment, food and fireworks displays.

Public ship tours will begin at 8:30 a.m. Friday. The weekend will also include a military and first-responder basketball tournament, a robotics competition, a Navy film festival, a Saturday night concert by the Beach Boys, a beer and barbecue festival, a Monday Conquer the Bridge 5.3-mile run/walk and a military culinary competition. 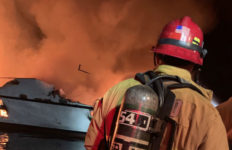