The attorney for the son of a former “Real Housewives of OC” cast member, who was attacked by a fellow inmate in Orange County Jail Wednesday night, said Friday he would seek to lower his client’s bail because sheriff’s deputies appear incapable of protecting the high-profile client.

Joshua Waring, 30, who is acting as his own attorney on one of his cases, had made a phone call regarding that case and was on his way back to his cell at the Intake-Release Center in Santa Ana when a blade-wielding inmate was awaiting him, Waring’s attorney Joel Garson said.

Waring is supposed to be in a sort of custody that separates him from other inmates because he is a notable inmate and is more vulnerable than most to attack, Garson said.

“As he was walking back from his telephone call, he was suddenly confronted by another inmate wielding two blades,” Garson said. “Josh tried to defend himself, but he slashed him in the chest and face. It took guards five or six minutes to arrive. He was lucky he didn’t get cut in an artery or somewhere else and bled to death. He never should have been in contact with this other inmate.”

The other inmate was also in protective custody and supposed to have been separated from other inmates, Garson said.

Waring was rushed to an infirmary where he received 20 staples to his body, as well as stitches and butterfly bandages on his face, Garson said.

He was then returned to the same jail module, just two doors down from his attacker, Garson said.

“Thursday night, they suddenly moved him to the Theo Lacy Jail” in Orange, Garson said.

The attack comes on the heels of another recent attack Waring outlined in a federal class-action lawsuit in which he is a plaintiff. While Waring was awaiting trial on attempted murder charges, he was thrown in “the hole” for trying to fix a television in the dayroom, he said.

Waring spent 10 days in solitary confinement and was then taken to another part of the jail where, he said, gang members “green-lighted me” for an attack.

When Waring raised concerns about his safety and asked to see a psychiatrist, he was told that was only possible if he felt suicidal, he said. Waring alleged deputies later “threw me naked … into a tiny all-cement cell filthy with feces” and a broken toilet.

Waring alleged he was denied medication for seizures while in the cell and suffered a seizure while confined there.

“We’re going to subpoena the video of the incident and seek a bail reduction … in that the sheriff’s department cannot protect Mr. Waring’s safety and may have been indifferent to his safety due to allegations he has made in phone calls and the lawsuit he has filed against the sheriff’s department,” Garson said of his client, who is being held on $1,050,000 bail.

Carrie Braun, a spokeswoman for the sheriff’s department, said the accusation was “completely untrue,” but did not elaborate.

Waring had warned deputies about the inmate who attacked him, Garson said.

“It seems odd that with all the warnings, they put him in a module two doors down, where he warned he could be a potential danger to him,” Garson said. 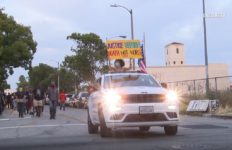