County officials, looking to attract a new restaurant to the Malibu coastline where Gladstones has operated for more than 40 years, are set to press state officials to allow a 40-year lease of the site.

The state owns the title to the land at Pacific Coast Highway and Sunset Boulevard and allows for concession agreements of up to a maximum of 20 years.

Los Angeles County Supervisor Sheila Kuehl thinks a longer term would be required to persuade an operator to build a brand-new restaurant.

“Because the existing facility is seriously deteriorated and outdated, the department desires the successful bidder to construct an entirely new facility, which the department believes will require an agreement term of 40 or so years,” Kuehl said in a motion to be considered by the Board of Supervisors tomorrow.

The county Department of Beaches and Harbors, which operates Will Rogers State Beach, had asked for the title to be transferred — something the state has done with eight other area beaches — but state authorities declined, citing on ongoing reorganization of the relevant department.

The Gladstones agreement with the county Department of Beaches and Harbors, which operates Will Rogers State Beach, expires in October 2017. Neither side wants to extend the contract, according to board documents.

Kuehl recommended finding a sponsor for legislation that would allow a longer lease.

Kuehl hopes that will clear the way for the county to solicit developers able to “completely reposition the property and take advantage of its unique and special coastline location.”

Will Gladstones Malibu be replaced with a new restaurant? was last modified: August 9th, 2016 by Stephanie Michaud

Woman Struck By Car in Malibu, Airlifted to Trauma Center→

Carlsbad to Ban Parking along Six Miles of Coastline→ 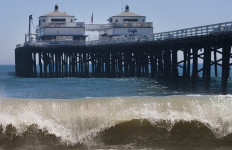