Snow may fall as low as Acton and the hills above Santa Clarita Sunday evening and Monday, as the National Weather Service Sunday warned that a late winter storm with the coldest temperatures so far this season was headed our way.

A winter weather advisory was issued for 6 p.m. Sunday evening until 3 a.m., forewarning of snow and ice on roadways, including Interstate 5 over the Grapevine and the Antelope Valley (14) Freeway.

“There could be significant travel impacts with possible road closures and delays,” the National Weather Service said in a statement issued at sunrise Sunday.

Snow might arrive after nightfall Sunday evening, with snow falling above the 5,000 or 5,500 elevation, with rain possible lower than that. As cold air blows in on strong winds, the snow levels will drop rapidly, to as low as 1,500 feet to between 1,500 to 2,500 by early Monday morning.

One to two inches of snow may fall overnight on the Grapevine, which crests at 4,491 feet at the northern end of Los Angeles County. Caltrans frequently closes the freeway at Tejon Pass because slush freezes into sheets of ice on the eight-lane freeway, one of four freeway links between southern and central California.

Cold winds of 25 to 35 miles per hour — with gusts to 50 mph or above — are expected, and wind chill readings will drop to -10 degrees in higher elevations late Sunday evening and Monday.

The highest snowfall amounts will occur on the north facing slopes.

In lower elevations, it will be cold Monday, with a slight chance of rain showers. Temperatures will drop 6 to 12 degrees in most areas, Sunday, with highs only in the 50s in Los Angeles, and around 45 in the interior valleys.

Winds were expected to decrease rapidly Monday night, and that will mean a very cold night across the region. Frost was predicted for the colder locations in the valleys of L.A. County Monday night, the NWS said. 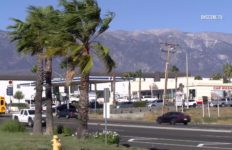