A mountain lion that was being tracked by National Park Service researchers and was found dead in the Santa Monica Mountains died from ingesting rat poison, which was also detected in the system of a second lion whose body was discovered a month earlier, officials said Tuesday.

But researchers said they could not conclusively say if the rat poison caused the death of the second lion, a 4-year-old female known as P-53. The lion’s body was too decomposed when it was found Aug. 15 in Malibu, but testing found four types of rodenticide in the cat’s liver.

Rat poison was identified as the cause of death of P-30, a 6-year-old male lion found dead Sept. 9 in Topanga State Park. Biologists hiked into the area after P-30’s GPS collar sent out a “mortality signal,” and found the cat with “no obvious signs of injury or trauma,” according to the NPS.

Testing determined that P-30 had five different anticoagulant rodenticide in his system.

P-30 is the fifth mountain lion in the NPS’ study known to have died from rodenticides. Researchers said lions often wind up with the substance in their systems by eating smaller animals that had eaten the poison.

“Since 2002, National Park Service researchers have documented the presence of anticoagulant rodenticide compounds in 23 our of 24 local mountain lions that they have tested, including a 3-month-old kitten,” according to the NPS.

Three Charged with Robbery in Which Clerk Was Severely Beaten→ 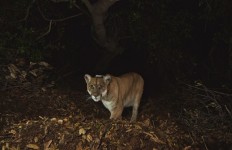