Los Angeles Mayor Eric Garcetti is scheduled Thursday to make his third trip out of the state in nine days, his office announced.

Garcetti is scheduled to return to Los Angeles Sunday afternoon to participate in the Hollywood Christmas Parade.

Garcetti’s destination was not announced. There was no immediate response to an email sent to Garcetti’s deputy communications director Alexander Comisar Wednesday evening seeking the location.

Garcetti flew to San Antonio Nov. 20 to speak at the National League of Cities City Summit, returning the following day. He was also out of the state from Nov. 22-25 at a location that has not been disclosed.

Garcetti is scheduled to be in Waterloo, Iowa Dec. 6 to be among mayors questioning candidates for the 2020 Democratic presidential nomination at a forum hosted by Accelerator for America, a nonprofit organization he co-founded, and the U.S. Conference of Mayors. 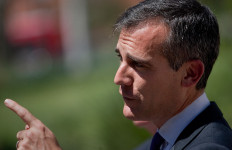