A report of a man with a gun on the UC Irvine campus forced students and educators to “shelter in place” Tuesday, but when police tracked down the man they concluded he did not pose a threat.

The report was made at 2:42 p.m., according to UCI spokeswoman Cathy Lawhon. An electronic alert was sent to all students and instructors, advising them to remain in place in a safe location, she said.

The man was first seen near the university flag poles and then headed toward Mesa Court, Lawhon said. When campus police caught up with the man they questioned him while advising the rest of the university’s students, instructors and employees to go back to their normal routines, Lawhon said.

It was unclear if the man actually had a weapon.

The university’s student government has a meeting scheduled tonight and may discuss a proposed ban on national flags in student government offices. The ban was approved earlier this month, but days later was vetoed by the executive branch. The ban, which includes the American flag, generated headlines across the country.

The last time the student government tried to meet on March 10 to discuss a possible override of the veto, the gathering was canceled due to a “violent threat,” officials said. 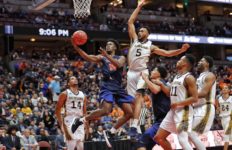