A 6-year-old boy skateboarding on a roadway in a Santa Ana apartment complex in Santa Ana was run over by a car and died at a hospital, authorities said.

The woman driver stopped and told police the boy ran in front of the car, Sgt. Carol Salvatierre of the Santa Ana Police Department said.

The boy was taken to a hospital where he later died, Salvatierre said. 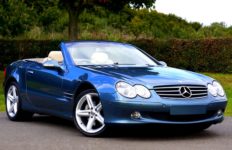