“Unknown suspects had used spray paint to deface an outside wall with swastikas and other markings,” Lovchik said. “There is no indication as to why this location was targeted, but based on the nature of the vandalism and the proximity to the church, this is being investigated as a possible hate crime.”

Rusty Kennedy, CEO of the Human Relations Commission told City News Service it was the fifth hate crime and the 22nd hate incident documented by the commission during this in the past month.

Police did not have suspect information, according to Lovachik. 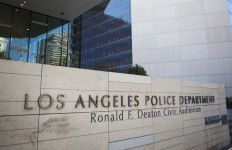