Orange County Republicans are claiming victory in their attempts to convince Coast Community College District officials to switch out their at-large voting system for a district-by-district alternative, but an official said Wednesday that no decision has been made.

Vong Xavier Nguyen, an unsuccessful candidate for the district’s board last year, hired Whitaker’s and Steel’s law firms to challenge the district’s at-large voting system. A lawsuit threat was sent to the district in May.

Nguyen claimed that he would have won in District 2 where he lived because of a large Vietnamese-American population, but he lost because his opponent, incumbent Jerry Patterson, received votes from throughout the entire district. 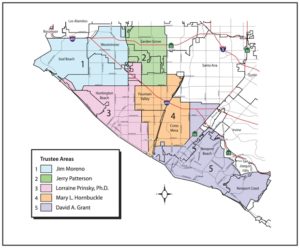 The Republicans said the district’s attorney said that the board would soon adopt a motion to change the at-large system to a district-by-district method in which representatives of a district would have to live within that district.

But Letitia Clark, a spokeswoman for the district, said the board has only agreed to discuss the issue at its July 19 meeting. The board wants to seek input from the community, she said.

If the district does switch its voting system then the public would be consulted on how to create boundaries for each district, Clark said.