Police asked Tuesday for the public’s help in capturing a skateboard-riding suspect who groped two women in Irvine on consecutive days.

On Sunday between 6:15 p.m. and 6:30 p.m., a woman jogging at Groveland and Townsend was groped by the suspect as he rode by her on a skateboard, according to Kim Mohr of the Irvine Police Department.

About 8:15 p.m. Monday, a woman jogging at Rolling Green and Statuary was shoved down to the ground and struggled with the suspect as he tried to stop her from shouting for help by covering her mouth with his hands, Mohr said. When that failed, he groped her before he fled, she said.

Police have increased patrols in the area and asked for the public’s help providing residential surveillance video that could help identify the suspect, Mohr said. Video from homes on the streets where the attacks happened and from residences facing the Jeffrey Open Space trail are needed, she said.

Anyone with helpful information was asked to call Detective Keith Herter at (949) 724-7183 or email him at kherter@cityofirvine.org. 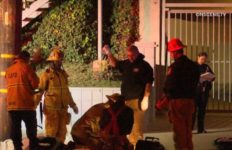