A domestic violence suspect led authorities on a chase from Montebello to the Camp Pendleton area where he surrendered after a PIT maneuver.

The chase began around Thursday night in Montebello but an exact location was not immediately given.

The suspect, who was traveling in a black Nissan sedan, traveled south on the Santa Ana (5) and San Diego (5) freeways through Orange County and into San Diego County.

At some point during the chase in the Mission Viejo area, the suspect traveled over a spike strip, flattening one of the car’s tires. The vehicle traveled at slower speeds before the California Highway Patrol used a PIT maneuver on the car.

The car traveled off the freeway in the Camp Pendleton area just before 11:30 p.m. and the driver came out with his hands up and surrendered to authorities.

The chase caused a large backup on the southbound Interstate 5 late Thursday night. 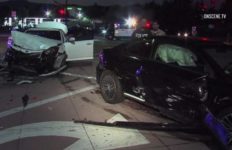 Driver Arrested After Chase From Yorba Linda To Diamond Bar→