Summer officially ends after Sunday, and the first week of autumn will feature “roller coaster” weather patterns throughout the Inland Empire, as well as the rest of Southern California, according to the National Weather Service.

In its Sunday forecast analysis, the NWS said that everything from dry offshore winds to rain showers are possible over the next six days in the region.

“This week’s weather will be somewhat of a roller coaster ride, starting out warm and dry, then transitioning to a Santa Ana (wind) pattern … before turning much cooler,” according to an NWS statement.

Forecasters said that summer conditions will persist into Wednesday, with high temperatures in the Riverside metropolitan area generally in the mid-90s and clear skies, while the Coachella Valley’s highs will top out in the low 100s.

A trough of low pressure currently sliding toward northern Mexico will veer northeast into Arizona by Tuesday, packing turbulent conditions.

“In SoCal, the greatest impacts from this system will likely be the gusty offshore winds in the mountains and inland valleys (Tuesday),” the NWS said. “Downslope flow will bring warming to the inland valleys and elevated fire weather concerns.”

Isolated thunderstorms in the desert and mountain areas are possible as the trough over Arizona lurches to the east, meteorologists said.

Another trough will begin sprawling across Southern California on Thursday, dominating regional weather into the weekend, according to the NWS.

A chance of rain is in the forecast for the Riverside metropolitan area and Coachella Valley Thursday night through Saturday night.

By Saturday, highs will only reach the mid-70s in Riverside, while the mercury will plateau in the mid-80s in Palm Springs, according to forecasters.

405 Connectors to 105, Near LAX, Scheduled To Close During Evenings This Week→ 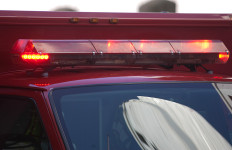