Monday will be warmer as winds turn offshore and the marine layer thins.

Wednesday will usher in a Santa Ana pattern that will persist through next weekend with low humidity, gusty northeasterly winds at times, and above-average temperatures.

A high surf advisory remained in effect through Sunday evening for area beaches.

At 8 a.m., areas of mist and fog over were reported over inland valleys, along with patchy drizzle from a deep cloud layer, according to a national weather forecast issued at 8:27 a.m.

Highs mostly around 5 degrees above normal are expected across the region for the first part of the week. At the end of the week, far inland areas and the lower deserts could see highs in the 80s. 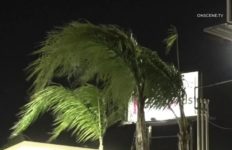