Health officials say 10 more people have succumbed to COVID-19 in Orange County, the highest daily number of deaths since the pandemic began, bringing the county’s coronavirus death toll to 98.

The number of hospitalized patients increased from 229 on Tuesday to 253 on Wednesday, with the number in intensive care rising from 86 to 93, according to the HCA.

The number of people who have been tested for COVID-19 in the county stands at 86,694.

Latinos account for 38% of the fatalities and whites 30%, followed by Asians with 17%. According to the HCA, 3% were black, 1% were native Hawaiian or Pacific Islander, 1% are mixed race, 7% is unknown, and 3% fall into the category of “other.”

County officials remain optimistic that many businesses can reopen by this weekend at the earliest after Gov. Gavin Newsom’s announcement Monday on loosening restrictions in Phase 2 of his plan to reopen the state, such as in-store retail.

Santa Ana has the most cases in the county with 833, followed by Anaheim with 751 and Huntington Beach with 301.

The Orange County Sheriff’s Department announced 364 inmates have tested positive since March, with 235 having recovered and others asymptomatic. Six of the inmates are currently sick and in medical isolation. Officials are awaiting the results of 40 tests.

At Windsor Gardens Convalescent Center of Anaheim, 63 patients have contracted coronavirus, but 27 have recovered and 36 are “active cases,” according to Anaheim officials. Two patients died at the facility, and 24 staffers have contracted COVID-19 with 16 considered active cases.

At Anaheim Healthcare Center, 52 patients have tested positive for coronavirus with just one sick as of now, officials said. Eighteen staffers have contracted the virus with 16 having since recovered. Five patients died at the facility.

At Harbor Villa Care Center in Anaheim, 47 patients have contracted coronavirus and 15 staffers tested positive, but no one has died there.

Outside of Anaheim, the state Department of Public Health has a tally of patients and healthcare workers affected, but does not provide exact numbers for cases numbering under 11. 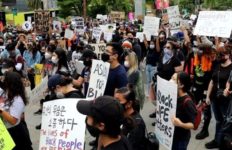 30 Protests and Marches Scheduled in Los Angeles and Orange Counties→