A cat who used one of his nine lives to survive being shot by an arrow bolt last month is up for adoption, and will be awarded to the winner of an essay contest, its rescuers said Saturday.

The Riverside County Animal Services Department took in the two-year-old cat and and a vet did emergency surgery on May 18, after it was impaled by an arrow in Perris.

Although the cat lost his left front leg, he survived, was named Archer and is looking for a permanent place to scamper about on the remaining three paws.

The Department of Animal Services asked prospective parents to write a short essay of no more than 500 words about why they want to adopt him.

“The essay does not have to be award-wining prose,” said the department’s director. Robert Miller. “We’re encouraging people to write from the heart as to why Archer’s plight has moved them to write to us and to provide his forever home.”

The ideal adopter will keep Archer indoors and guard against overfeeding the tripod cat since he won’t be able to support as much weight as his four-legged peers, according to staff veterinarian Dr. Sara Strongin.

Essays can be submitted through midnight Tuesday in person at any of the county’s shelter locations, or by email at shelterinfo@rivco.org.

Writers should include their full name, address and best telephone number. Those submitting by email were asked to put “Archer The Cat Essay” in the subject line.

Cat Who Survived Arrow Attack Up For Adoption was last modified: June 9th, 2018 by Contributing Editor

Man’s Conviction Upheld for Attack on Ex-Girlfriend in Glendale→ 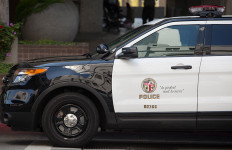