A man suspected of vehicular manslaughter and felony drunken driving a single-vehicle rollover crash that killed a teenage girl and injured four others in Whittier was released on his own recognizance, authorities said.

Daniel Vasquez, 19, of Whittier had been held at the Whittier jail on $100,000 bail, but investigators were unable to present a case to the Los Angeles County District Attorney’s office within the legally mandated 48-hour period to either bring charges and arraign or release the suspect, Whittier police Officer John Scoggins said.

Vasquez was released early Thursday afternoon, according to Scoggins.

The SUV Vasquez was driving with five others on board crashed about 11:20 a.m. Tuesday in the 8400 block of Villaverde Drive, near La Serna High School, Scoggins said.

Vasquez was speeding southbound on Villaverde Drive from Mar Vista Street when he lost control of the vehicle, which veered onto the sidewalk, struck a large brick mailbox and rolled over, coming to rest on its roof, police said.

Ivette Macias, a 14-year-old student at La Serna High School, died in the crash, according to Lt. Larry Dietz of the coroner’s office and Loring Davies, assistant superintendent of educational services for the Whittier Union High School District.

The others in the SUV were seriously injured and two were airlifted to hospitals.

“The district is working with the Whittier Police Department to determine the details surrounding the accident,” Davies said.

Jay Lee, who said he was playing golf nearby, told ABC7 he heard the crash and ran to the scene.

“I looked out and then I just saw, well, a car just flipped over,” he said. “And I heard a young girl, she was screaming pretty badly, … her friends weren’t waking up so she was very scared, I guess. And there was actually a lot of blood.”

Lee said he saw a lot of beer cans around the crash site.

The case eventually will be presented to the district attorney’s office and Vasquez will have to answer to any charges that may be filed, Scoggins said.

Vasquez was not thought to be a flight risk and has no prior history of violent or gang-related behavior, the sergeant said. 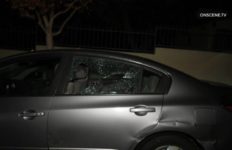 Vandals Damage Over 50 Vehicles During Nighttime Spree in Whittier→