A homeless man taking shelter in a residence under construction was forced out with a volley of tear gas and arrested Wednesday after a tense, hours-long standoff with a SWAT team.

The incident began about 9:30 a.m. near Beverly and Plymouth boulevards, according to the Los Angeles Police Department. The unidentified suspect was taken into custody shortly before 2 p.m.

KNX Newsradio reported that the man was squatting in a home under construction and had threatened workers, but he was not believed to be armed. He was taken into custody after police used tear gas, the radio station reported. No further details were available. 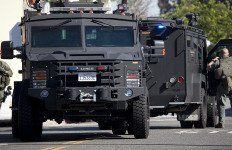