A Beaumont man who allegedly caused a 2017 Mecca crash that killed a woman and her 2-year-old daughter was in custody Monday.

Joshua William Brown, 25, is accused in the March 11, 2017, crash that killed Nancy Frias Zaragoza, 31, of Thermal, and her daughter Melanie Perez. Investigators contend Brown tried to pass Zaragoza’s car at high speed, then rear-ended her, causing her to crash into another vehicle.

Prosecutors charged him in late December with two counts of vehicular manslaughter with gross negligence and one count of reckless driving causing injury.

Brown is accused of traveling at 80 to 85 mph when he tried to pass Zaragoza on northbound Grapefruit Boulevard in Mecca, then causing her to veer head-on into opposing traffic in the road’s southbound lanes, according to an arrest warrant declaration.

As Brown entered the southbound lanes to pass Zaragosa, he allegedly swerved back into northbound traffic to avoid a Toyota heading directly for him. As he swerved, Brown’s vehicle clipped the back of Zaragoza’s car, causing it to move into southbound traffic, where it crashed into the Toyota, the declaration states.

Zaragoza died at the scene. Her daughter died about a month later in a hospital.

The driver of the Toyota also sustained major injuries in the crash.

The declaration states that “a review of the defendant’s driving record revealed a history of moving violations and excessively exceeding the posted speed limit near the area of the collision, which demonstrated a pattern of a negligent operator with wanton disregard for the public’s safety.”

The details of Brown’s arrest were not immediately available, but Riverside County jail records indicate he was transferred from Imperial County early Monday. He was later booked into the Southwest Detention Center in Murrieta, where he was being held on $150,000 bail.

He’s expected to make his initial court appearance in Indio on Thursday.

Alleged driver in ‘passing’ crash that killed a mother and baby arrested was last modified: January 15th, 2018 by Christina Kelley 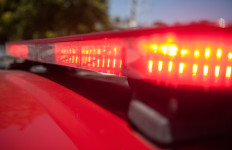