Emails filed Tuesday in federal court by an attorney for a parent accused in the college admissions scandal show USC officials explicitly discussed how much money the parents of applicants could donate to the school.

The emails were filed by an attorney for Robert Zangrillo, a father charged in the admissions scandal that has ensnared several top universities, officials, coaches, parents and students, according to published reports.

The messages between the USC athletic department and admissions office flag students whose wealthy parents have donated or would donate to the school, along with indications of how much was given or was expected, according to the reports.

Zangrillo’s attorney, Martin Weisberg, has subpoenaed additional records from USC, which is fighting the request as a so-called fishing expedition, according to the Los Angeles Times.

Zangrillo is accused of making payments to William “Rick” Singer, the admitted mastermind of a scheme to extract payments for help getting applicants into top colleges, sometimes on the basis of bogus athletic achievement or through testing fraud, in an effort to get his daughter admitted to USC. He has pleaded not guilty to fraud and money laundering conspiracy charges.

The university has maintained that officials, including those in the athletic department, are allowed to flag prospective students for special attention but final decisions are made solely by the office of admissions and that decisions were not based on donations

“Mr. Zangrillo’s filing appears to be part of a legal and public relations strategy to divert attention from the criminal fraud for which he had been indicted by a federal grand jury,” according to a statement from a USC spokesman as reported by The Times.

“USC remains confident that the court will agree with us that it need not produce the information and documents requested by the defendant.”

Weisberg contended in his court filing there exists “a university-wide program at USC” involving donations received, pledged or expected that “deeply” affect admissions decisions. He also claims that recommendations from “persons of power, wealth, or position in the USC community, past or present” play a role in whether a student is admitted.

Among those accused of participating in Singer’s alleged schemes are actresses Lori Loughlin, whose daughters were admitted to USC based on their credentials as rowers, even though they were not actual crew athletes. Loughlin is fighting the charges.

According to The Times, 19 parents of USC students and four USC athletics officials were charged in the case, which was filed in Boston.

Prosecutors allege that Zangrillo paid Singer $200,000 and former USC athletics administrator Donna Heinel $50,000 to get his daughter into USC. Heinel, who has been fired by the university, has pleaded not guilty to racketeering conspiracy charges.

She wrote a number of the emails in Weisberg’s filing, according to The Times, which described Heinel as serving as the athletic department’s liaison with the school’s admissions office.

Earthquake Strikes Near Castaic, No Immediate Reports of Damage→ 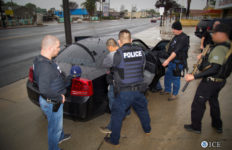