Park was charged a year ago and faced up to six months in jail if convicted. Jurors deliberated for about three hours over two days before telling Orange County Superior Court Judge Beatriz Gordon they were deadlocked, Park’s attorney, Julie Swain, said.

Swain argued Park had the property owner’s permission to read signs that bore her name and “carpetbagger” on them. There was a question of whether the signs were on private or city property, but Swain argued it shouldn’t matter since her client wouldn’t have known the boundaries and therefore there was no criminal intent.

The signs were placed in the 4600 block of Beach Boulevard in an office park, Swain said.

They were put up by the Committee for a Better Buena Park, and one of its members admitted during testimony he had been convicted in the past of sign stealing, Swain said.

Park’s opponent in the election testified for her as a character witness, Swain said.

Park and an unidentified man were accused of taking about a dozen signs, reading “No Sunny Park, Carpentbagger,” prosecutors said. 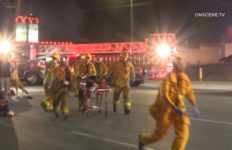