Burbank Unified school officials have removed a mural of Myanmar leader Aung San Suu Kyi from a local campus, doing so the same week that the Nobel Peace Prize laureate appeared at the International Court of Justice to denounce genocide charges levied against her country’s military.

Four years ago, Suu Kyi, whose official title is the state counselor of Myanmar, was one of 15 historical figures depicted in murals painted at Muir Middle School’s Hall of Heroes.

“The murals are supposed to serve as examples of what our students can aspire to,” Muir principal Greg Miller said earlier this week in remarks reported by the Los Angeles Times.

Since then, Muir Middle, a school that prides itself on artwork, has added five more murals, including baseball pioneer Jackie Robinson, scientist Albert Einstein and former First Lady Eleanor Roosevelt.

The Suu Kyi mural is the first to be taken down, and Miller said it was at no cost to the district, The Times reported.

When asked if anyone had complained about the mural, Miller said in an emailed statement, “Not one individual” said anything on the subject even though there have been hundreds of adults who have walked the hallway just to see the portraits, The Times reported.

No official reason was given for the mural’s removal, and Burbank Unified Superintendant Matt Hill did not respond to an inquiry from The Times.

Since the mural was painted, Suu Kyi has undergone a political transformation that has stunned supporters. An admirer of Gandhi, Suu Kyi was awarded the Nobel Peace Prize in 1991 “for her nonviolent struggle for democracy and human rights” against Myanmar’s military regime, according to the Nobel Peace Prize Committee.

For her efforts, she was placed under house arrest in Myanmar, the former Burma, for 15 years and not fully freed until 2010. While imprisoned, she was a founder of the country’s National League for Democracy, a pro-democracy party, in 1988. She served as its general secretary and stayed in office until 2011.

The next year, Suu Kyi was elected to a parliamentary seat en route to eventually becoming the state leader in 2016.

“She had a moment in history where she rose to the occasion of really taking on forces for democracy against authoritarian oppression,” said Eric Schockman, professor of politics and international relations at Woodbury University.

But since 2017, Suu Kyi, the country*s civilian leader, has stood silently as the primarily Buddhist nation’s army has forced 671,000 Rohingya Muslims to flee the country’s Rakhine state, according to Human Rights Watch, “to escape the military’s large-scale ethnic cleansing.”

She made her final defense of the nation’s military action at the International Court of Justice on Wednesday, admitting some excessive force and violence, but not genocide. Charges have not been filed against Suu Kyi individually. 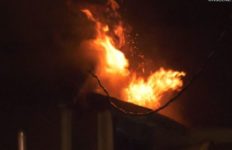