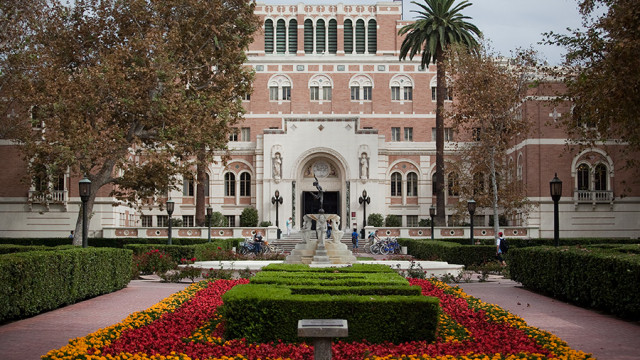 The USC Trojan Marching Band and the university’s cheerleaders led a parade through the Expo 2015 fairgrounds in Milan, Italy Saturday as part of USA National Day.

The band played the U.S. and Italian national anthems outside the expo’s USA Pavilion for a crowd that included Agriculture Secretary Tom Vilsack and Italy’s Agriculture Minister Maurizio Martina.

USC has another connection to Expo 2015. The USC Marshall School of Business runs the USA Pavilion’s Student Ambassador Program in partnership with Friends of USA Pavilion Milano 2015.

The program involves 120 college students from across the nation, spending three-month stints helping visitors to the pavilion.

This is the sixth time in 27 years the band has represented the U.S. at a world exposition. It played for USA National Day festivities at expos in Seville, Spain (1992), Aichi Prefecture, Japan (2005) and Shanghai, China (2010).

At Expo ’98 in Lisbon, Portugal the band performed for the grand opening of the USA Pavilion. The band also visited the 1988 world’s fair in Brisbane, Australia.

Expo 2015’s theme is “Feeding the Planet, Energy for Life” with more than 140 nations showing the best of their technology to be able to guarantee healthy, safe and sufficient food for everyone, “while respecting the planet and its equilibrium,” according to organizers.

The USA Pavilion’s theme is “American Food 2.0: United to Feed the Planet.” It showcases the nation as an innovator in the food sector and many other aspects of culture, science and business.