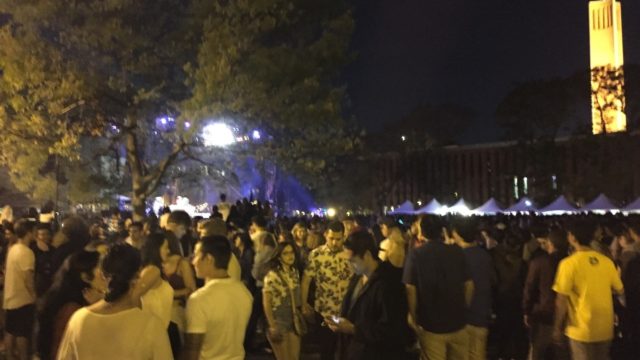 ‘Fight On’ was more than a USC slogan as the campus’ annual Springfest concert was cut short by safety authorities after students pushed and shoved to get into the overcrowded event and four people were ill or injured.

“We’ve proudly made the survival and safety of Trojans a priority since 1886,” the Los Angeles Fire Department posted on Twitter in response to concerns about the decision.

“Overcrowding led to early closing of an outdoor concert for safety reasons,” Humphrey said. “There was no stampede and no life-threatening injury.”

Witnesses, posting on Facebook, described an environment where some students brought outside guests, jumped fences and shoved others to get nearer to the multiple stages.

The Georgia-based rap/hip-hop group Migos was two songs into its set with guest Travis Scott when the closure was announced, according to USC’s Daily Trojan newspaper.

One group member asked the crowd to step back, stop pushing and leave the area if they needed medical attention, the campus paper reported.

Firefighters assessed four people who were ill or injured, Humphrey said. The Los Angeles Police Department’s riot squad was also on the scene after campus police warned the event was at maximum capacity.

At least one person was taken to a hospital for further evaluation. Two others declined treatment and were released at the scene.

Other scheduled performers included the hip hop duo Rae Sremmurd, who were the headliners, Big Gigantic, Vanic, Xylo, Courtship and Taylor Wise. Most had not performed before the cancellation.

The annual Springfest, which is coordinated by the student-run USC Concerts Committee, also features vendors, food and art. Students need a USC identification card to attend.

Here’s what you need to know about Springfest’s early shutdown https://t.co/MYXHnNWKvr