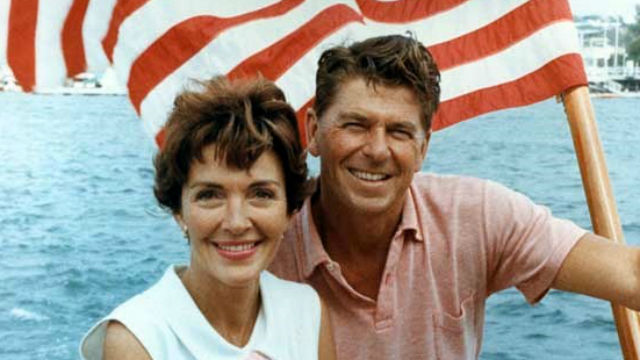 Dignitaries from the worlds of politics, media and Hollywood bade farewell Friday to Nancy Reagan, hailing the former first lady as an astute political mind, a commanding presence and an ever-dedicated, devoted and loving wife to the nation’s 40th president.

Reagan died of congestive heart failure in her sleep at her Bel Air home Sunday at age 94. Her funeral at the Ronald Reagan Presidential Library and Museum was attended by about 1,000 invited guests — a list compiled largely by Nancy Reagan herself.

She was “a woman who captured the heart of a man who loved his craft, his country and his countryman and most especially loved this remarkable woman,” former Secretary of State James Baker told the crowd during the service, which was a mix of solemnity and humor.

Baker said Ronald Reagan never would have won the White House without her “or succeeded as well as he did.”

“She knew who was paddling their own canoe and who was loyal to the president,” Baker said, noting that White House advisers learned to “keep her informed and seek their support.”

He said the only time he saw Nancy Reagan lose her composure “was the day the president was shot.”

“She was devastated and in fact she fell apart,” Baker said. “Even in his condition, he (Reagan) did his best to give her strength. ‘Honey, I forgot to duck,’ he said. That was his way of comforting her.”

Former NBC News anchor Tom Brokaw echoed that sentiment, noting that when Nancy was informed at the White House about the shooting and Secret Service agents were hesitant to take her to immediately see him, she told them, “You get me a car right now or I’ll walk to the hospital.”

Officials with the Ronald Reagan Presidential Foundation said Nancy Reagan played a large role in the planning of her own funeral, from designating pallbearers to specifying her burial location within inches of the man with whom she shared a five-decade love story.

She also selected the opening song for the funeral service, “Battle Hymn of the Republic,” a favorite of her husband.

The Rev. Stuart A. Kenworthy, vicar of the Washington National Cathedral, presided over the service, which featured readings by Nancy Reagan’s niece and nephew — Anne Peterson and Barton Hegeler — and her brother, Richard Davis.

Former Canadian Prime Minister Brian Mulroney read the crowd a love letter that Ronald Reagan wrote to Nancy on their first Christmas together at the White House, in 1981. He also told a story from 1987, when he and Reagan were at an airport in Ottawa, Canada, and their wives arrived and walked toward them.

“President Reagan beamed. He threw his arm around my shoulder and he said with a grin, ‘You know Brian, for two Irishmen, we sure married up.’

“I mention this anecdote again, because it reflects a unique Reagan reality — she really always was on his mind. We all know of Ron’s great love and admiration for Nancy and the elegant and constant manner in which he publicly expressed it.

“One day at the White House, after another absolutely glowing tribute by President Reagan to his beloved Nancy, I said privately, ‘You know, Ron, you’re going to get me and all the rest of us here in a whole lot of trouble with our wives because we can’t keep up with you.’ And the president chuckled and looked up at me with that Irish twinkle in his eye and said, ‘Well Brian, that’s your problem, not mine.”‘

“I was so terrified of that, I used to hide my roll under the table and butter it so she couldn’t see it,” she said. “I didn’t want to offend her.

“As the lunch would end she would make her way up the hill to the house, with the memories and the silences and her happiness when the children were coming,” Sawyer said. “And all this week I’ve been thinking about watching her head down the hall, because she would head into the bedroom and right there — I can’t remember exactly what it was, was it a pillow or a framed needlepoint  — but I know the words were clearly from President Reagan, and it said something like this, ‘If you must leave, could you just take me with you.”‘

Patti Davis, Nancy’s daughter, told the crowd her “challenging and often contentious” relationship with her mother was no secret.

“When I was a child, I imagined having warm, comfortable conversations with her — the kind of conversations that feel like lamplight,” she said. “The reality was far different. I  tried her patience and she intimidated me. We were never mild with one another. Whether we were distant and angry or bonded and close, our emotions burned up the color chart. Nothing was ever gray. But there were moments in our history when all that was going on between us was love. I choose to remember those moments.”

Born Anne Frances Robbins in a troubled home in New York City, the future first lady was adopted and gained a new last name from her stepfather, Dr. Loyal Davis, a Chicago physician.

Anne Davis went by the nickname Nancy as she grew up and graduated from Smith College in 1943, did some acting on the Broadway stage and broke into the movies when MGM’s George Cukor gave her a bit part in 1949’s “East Side, West Side.” The studio changed her first name to Nancy.

After the name Nancy Davis was printed in a newspaper letter supporting blacklisted scriptwriters, she sought the help of the Screen Actors Guild to make it clear that she was not that Nancy Davis and that the listing had been a mistake. Ronald Reagan was the president of the guild, who helped her make sure the studios and public made that distinction.

They married in March 1952, and together purchased a home at 1251 Amalfi Drive, in Pacific Palisades, where they lived until a move to Sacramento in 1966. They had two children together, Patti and Ron Jr., and she also helped raise Ronald Reagan’s two children with his first wife, Jane Wyman.

“Hellcats Of the Navy” in 1957 was the only movie they appeared together in, but she continued to act in TV and minor movie roles.

But her biggest role turned out to be as Ronald Reagan’s adviser, counselor and fierce protector when he was in public life, and later, serving as his chief caregiver after he became stricken by Alzheimer’s disease. Reagan died in June 2004.

In 1989, at the end of Reagan terms in Washington, the couple retired to a house in Bel Air: the street number was changed from 666 to 668 at the request of Nancy Reagan, who was superstitious and who had made use of a psychic to help guide her husband during his presidency.

The Reagans traveled between Bel Air and their ranch at Rancho del Cielo, in the mountains above Santa Barbara. The ranch was sold when the ex- president was diagnosed with Alzheimer’s disease in 1994.

The Reagan Library is scheduled to reopen to the public at 10 a.m. Sunday.

According to the Reagan Foundation, Nancy Reagan requested that in lieu of flowers, contributions be made to the Ronald Reagan Memorial Fund at www.reaganlibrary.com.