Will the former president get to play golf again Sunday as rain is in the forecast for the Palm Springs area?

Barrack Obama donned his civies and hit the links Saturday as he began his desert vacation and his first full day out of office.

His motorcade was spotted at about 11:30 a.m. heading to Porcupine Creek, the 249-acre, private golf club of Oracle founder and billionaire Larry Ellison, according to several media reports.

The former commander in chief has in the past golfed at the ultra- exclusive 19-hole course, including a visit in February last year while he was still in office.

Obama and his family arrived in the Coachella Valley following the inauguration of President Donald Trump on Friday hours later than expected, after weather conditions delayed their Palm Springs vacation, forcing their plane to land about 50 miles west of their destination in western Riverside County.

At about 8 p.m., the motorcade arrived at the Thunderbird Heights gated community in Rancho Mirage. The Obamas are staying at the home of outgoing U.S. Ambassador to Spain James Costos and his husband, interior designer Michael Smith, who’s been the White House decorator since 2008. Obama has stayed at the home four times during his presidency.

The visit is likely to give new life to rumors circulating for years that the Obamas plan to buy a home at Thunderbird Heights. 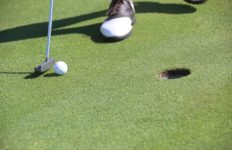