An accident involving an overturned semi truck and at least three other vehicles Friday morning prompted the closure of several lanes of the east- and westbound Pomona (60) Freeway in Industry.

Officers responded about 3:40 a.m. to the eastbound lanes of the freeway, near Crossroads Parkway, where an overturned big rig was on top of the center divider, blocking the carpool lane, according to the California Highway Patrol.

The CHP received calls that concrete debris from the center divider was in the east- and westbound lanes of the freeway.

The carpool and Nos. 1, 2 and 3 lanes of the eastbound Pomona Freeway would be closed for an unknown duration. Traffic was diverted off the freeway at Crossroads Parkway, the CHP said.

The westbound lanes were closed for about 45 minutes before being reopened about 4:15 a.m.

No injuries have been reported. 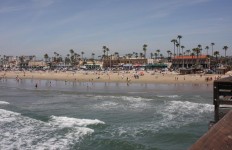