A cold, fast-moving storm out of the Gulf of Alaska worked its way toward the Southland Tuesday, poised to hit Thursday, when it will generate between three and five hours of moderate rain, but as of this morning it is not expected to trigger mud slides or debris flows in burn areas, National Weather Service forecasters said.

In the San Gabriel Mountains, four to eight inches of snow will fall above 5,500 feet and between one and four inches between 3,500 and 5,500 feet, said NWS meteorologist Rich Thompson in a telephone interview from his base in Oxnard in Ventura County.

South winds of 40-50 miles per hour and strong cross winds are expected over icy, snow-covered roads in mountain areas, causing blowing snow and sharply limiting visibility, warned the NWS, adding that the roads expected to be affected by challenging conditions include Interstate 5 through the Grapevine, the Antelope Valley (14) Freeway, Pearblossom (138) Highway, and Highway 33 in Ventura County.

He said three to five hours of rain is expected Thursday and Thursday night, likely generating some minor urban flooding, although mud slides and debris flows over slopes denuded by wildfires are not expected.

“At this point, no problems are anticipated in burn areas,” he said early Tuesday morning.

Between a quarter-inch and three quarter of an inch of rain are expected along the L.A. County coast and in the county’s valleys, and between three-quarters and an inch-and-a-half in the mountains and foothills, according to the NWS.

Similar conditions are expected in Orange County Thursday, with a quarter inch of rain near the coast starting late in the day, between a half- inch and an inch in the Santa Ana Mountains, and no problems expected in the burn areas of Orange and Riverside counties, NWS meteorologist Greg Martin said from his monitoring station in San Diego, describing the approaching system as “smaller” and “fast-moving.”

The NWS forecast sunny skies in L.A. County Tuesday, along with highs of 51 on Mount Wilson; 58 in Lancaster; 60 in Avalon; 61 in Long Beach, Saugus, Burbank and at LAX; and 63 in Downtown L.A., Pasadena, San Gabriel and Woodland Hills. Wednesday’s temperatures will be about the same in some communitiews, slightly higher in others amid a combination of sunny and partly cloudy skies, but Thursday’s highs will dip to the low and high 50s amid rain before rising to the 60s on Friday.

The NWS also forecast sunny skies in Orange County Tuesday and highs of 49 on Santiago Peak; 53 on Ortega Highway at 2,600 feet; 56 in Fremont Canyon; 57 in Laguna Beach; 59 in Trabuco Canyon and San Clemente; 60 in Newport Beach, Yorba Linda and Mission Viejo; and 62 in Fullerton, Anaheim and Irvine. Wednesday’s temperatures will be about the same or slightly higher, still under sunny skies, but Thursday’s highs will be unchanged in some communities but several degrees lower in others  bore reverting to roughly Wednesday’s levels under sunny skies. 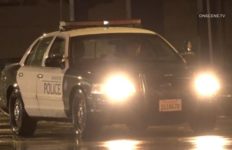