The Los Angeles City Council Tuesday asked inspectors to investigate operations at an oil field in West Los Angeles amid reports the company may be operating a gas burner without proper permits.

According to a motion introduced by Councilman Paul Koretz and approved on a 13-0 vote, the E & B Natural Resources company received a permit in 2012 from the South Coast Air Quality Management District to construct an enclosed gas burner for its oil and gas drilling operations at 10460 W. Pico Blvd. The company renewed the permit in 2016, but never got the proper permits from either the city’s Planning Department or Building and Safety Department, which may be a violation of Los Angeles Municipal Code, according to the motion.

The burner has the ability to burn up to 12 million cubic feet per month of natural gas, and three schools are located within a 1,500 foot radius of the equipment. the motion said.

“We look forward to working with the city of Los Angeles to clarify guidelines when environmental upgrades are made to facilities,” according to a statement from E & B Natural Resources to City News Service. “The installed equipment, permitted by the South Coast Air Quality Management District, reduces air emissions and increases safety in the surrounding areas.

Since we installed the emissions control device, there have been no complaints from any residents, businesses, park users, schools or government agencies. We support a transparent process and are happy to work with the City Council and any departments to clarify the requirements in Council member Koretz’s motion.”

The motion directs the Planing Department, the petroleum administrator, Building and Safety and the Los Angeles Fire Department to immediately investigate and report back on the operations at the facility within 30 days, including a full review of conditions to verify the site’s permits, and — if necessary — initiating nuisance revocation proceedings.

Koretz also expressed frustration with the city’s departments to inspect and oversee gas and oil operations in the city, and said, “We also need to fix this system so this doesn’t happen anymore.” 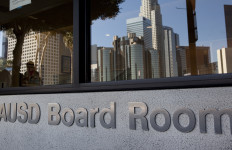