Former Vice President Joe Biden and South Bend, Indiana, Mayor Pete Buttigieg will both be conducting fundraisers in the Los Angeles area Thursday for their campaigns for the 2020 Democratic presidential nomination.

Buttigieg is also set join Los Angeles Mayor Eric Garcetti in speaking at a rally with various union leaders in support of a parcel tax on the June 4 ballot to increasing funding for the Los Angeles Unified School District.

According to Variety, Buttigieg is planning to attend four fundraisers in the Los Angeles area on Thursday, including one at the home of actress Gwyneth Paltrow and a more low-cost — $25 per person — event at the Abbey in West Hollywood.

Variety also reported that Buttigieg is already planning to return to Los Angeles June 19 for four more fundraisers, including one hosted by TV producer Ryan Murphy.

On Wednesday, Biden began his first visit to the Los Angeles area since declaring his candidacy on April 25 by speaking at a midday fundraising event at the Hancock Park home of UCLA School of Medicine faculty member Dr. Cynthia Telles and her husband, media executive Joe Waz.

Biden then greeted residents and sat down for tacos in the Pico-Union area with Garcetti and spoke at an evening fundraiser at the Brentwood home of James Costos, the U.S. ambassador to Spain during President Barack Obama’s administration, and his husband, designer Michael Smith..

Biden spoke for about 20 minutes at the first event, thanking the roughly 250 people in attendance for their support and telling them he wants to “restore the backbone of this country.” He also said he can bring the country together, accusing President Donald Trump of being a divisive force, dating back to the deadly 2017 white-nationalist rally in Charlottesville, Virginia.

“Four years of this president will be an aberration in a moment in history,” he said. “Eight years will fundamentally change who we are, beginning particularly in foreign policy.”

Outside the event, a group of protesters with the National Union of Healthcare Workers rallied in an effort to gain Biden’s backing in a continuing labor dispute with Kaiser Permanente. Telles sits on the board of directors of Kaiser Foundation Hospitals.

In a statement Tuesday, NUHW President Sal Rosselli said Biden “has the chance to do the right thing by standing with Kaiser clinicians and patients committed to making Kaiser provide timely and adequate care.”

NUHW staged a five-day strike at Kaiser facilities in December, contending the dispute is focused on under-staffing that forces mental-health patients “to wait months to see their therapists.” Kaiser has rebuffed that claim, insisting the union is not concerned about access to care, but about higher wages and increased benefits.

“This is a publicity stunt by union leadership disguised as a bargaining tactic aimed at disrupting a board member’s event,” Kaiser Permanente Vice President of Communications John Nelson said in a statement.

Nelson said the sides are “on a path toward an agreement” and called it disappointing that “union leadership has decided to engage in this unproductive behavior today.”

Film mogul Jeffrey Katzenberg was among the co-hosts of the evening event, along with producer/businessman Peter Chernin and director Rob Reiner. Katzenberg also hosted an October fundraiser in Beverly Hills on behalf of Biden’s political action committee, American Possibilities. Biden spoke at that event.

Tickets were $2,800, the maximum individual contribution to a presidential primary campaign, which included a photo reception with Biden. Co-hosts were committed to selling $10,000 worth of tickets.

Biden spoke to the crowd of more than 300 for about 20 minutes, joking that half a dozen of them had called him over the previous two years and said, “You don’t have a choice — run. This is not about you.”

“I said: `Thank you very much,”’ drawing laughs.

Biden then reiterated his reasons for running for president in the 2020 race and the importance of lifting up the middle class.

Between his fundraising events, Biden got together with Garcetti in the Pico-Union district to meet with residents, and the pair stopped at a King Taco eatery, where they ordered tacos and drinks and sat with diners.

When surrounded by reporters, Biden fielded questions on a variety of topics — ranging from the dispute over release of the Mueller Report to the federal crackdown on illegal immigrants and this week’s school shooting in Colorado.

Biden did not directly answer a question of whether he would consider Garcetti as a possible running mate, but heaped praise on the mayor, who had pondered a 2020 presidential run before announcing earlier this year he would not be pursuing such a bid.

“I just want to tell you, when he decided not to run I called him and I said I really have mixed emotions about this,” Biden said. “The reason is, number one, I think he’s one of the most qualified people in this country, one of the best mayors in this country.

“He’s done incredibly innovative things. And I said, `But I’m also glad you’re not running because I plan on running.’ And I’m serious, I wouldn’t want to run against you. But look, he is qualified to be mayor, to be president, to be senator — to do anything he decides to do. He’s totally qualified.” 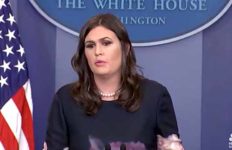