The impact of the crash that happened about 7:25 p.m. Thursday at Indiana Street and Whittier Boulevard caused one of the vehicles to strike five pedestrians standing on a corner, according to Officer Tony Im of the Los Angeles Police Department’s Media Relations Division.

One boy died at the scene and the other died at a hospital, he said.

The coroner’s office has not yet revealed their identities, waiting to officially notify family members.

One of the other vehicles struck two adults in a crosswalk, Kuey said. They were taken to a hospital for treatment, as were two sheriff’s deputies.

The deputies, who had been headed to a shots-fired call, were listed in stable condition, police said. It was unclear if the patrol vehicle had its siren activated.

The two civilian drivers involved in the crash remained at the scene and were cooperating with the investigation, police said.

“We extend our deepest condolences to the families and all those affected by this tragic accident,” a sheriff’s department statement said.

“The Los Angeles County Sheriff’s Department is working to provide the Los Angeles Police Department’s Multi-Discipline Collision Investigation Team with any information it needs or requests during the course of its investigation. The LASD and its personnel are heavily impacted any time an incident involving our response to an emergency, or efforts to help others in need, results in injury or the loss of life,” the statement said. 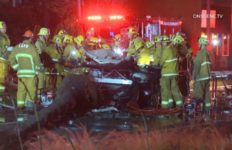