A potential ballot initiative to convert the Los Angeles Police Department’s former headquarters into a homeless shelter has been approved for circulation and collection of petition signatures in an effort to get it on the ballot, the City Clerk’s Office announced Wednesday.

The City Council has already approved a plan to demolish Parker Center and replace it with an office tower for city workers, but AIDS Healthcare Foundation President Michael Weinstein and his supporters announced an effort in May to halt the demolition and convert the building into a homeless shelter.

Weinstein said earlier he will need to collect about 65,000 signatures from registered voters to get the issue on the ballot. The city is not due to hold another municipal election until 2020, but Weinstein said the city could call a special election for the ballot measure.

He also conceded the city has the legal right to tear the building down even if the ballot measure is approved, but argued it would look bad for the city to do so in the face of a growing homeless crisis.

There was no immediate comment on the proposed ballot measure from Mayor Eric Garcetti and Councilman Jose Huizar, who represents the Civic Center area and led the effort to build an office tower as part of a redesign of the neighborhood.

The City Council has continued to march forward with the demolition plans since Weinstein announced the ballot effort. Earlier this month, the council approved a public/private financing plan for the project and scheduled the demolition to begin this fall and be completed by December 2019. The council also approved a substantial increase in the estimated cost of the project, which moved from $483 million to $708.9 million.

In response to the rise in homelessness the last few years, Garcetti and other city leaders supported Measure HHH, a successful 2016 ballot initiative that aims to raise $1.2 billion for permanent supportive housing for the homeless. More recently Garcetti and the City Council have also put focus on temporary homeless shelters in the form of large tents and trailers and approved a $20 million plan to install them in each of the city’s 15 districts.

HHH-funded units have proven to be costly and as high as $450,000 per unit, and a recent report from City Administrative Officer Richard Llewellyn estimated the city will fall at least 4,000 units short of the goal of 10,000 new units if it stays on its current path.

Weinstein and his supporters have argued that the city should focus on adapting and reusing empty buildings such as stores, schools, hospitals, hotels and government buildings, which he said would be cheaper than new construction. The Healthy Housing Foundation, which the AHF supports, has bought at least two hotels in the last few months with the goal of converting them into housing for the homeless.

“Let’s get real. We are not going to solve the problem of homelessness if we spend $450,000 per unit. That just doesn’t make sense,” Weinstein said. “It’s plum crazy, and it takes a long time. The reality is that the only solution is adaptive reuse.” 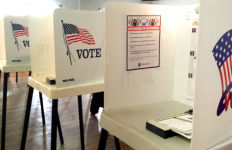