A $25,000 reward was offered Tuesday for information leading to whoever killed a young man, who volunteered as an Explorer at the sheriff’s Norwalk Station, and his friend nearly seven years ago.

“It has been seven long years and we still do not know who did this,” Hahn said at a news conference at the downtown Kenneth Hahn Hall of Administration. “Cesar and Larry’s families deserve answers and there are people out there who have them. If you know anything about this horrific crime, I urge you to come forward.”

Cesar Rodriguez, 19, of Whittier, was fatally shot as the aspiring deputy stood with a friend, 24-year-old Larry Villegas, in front of a house in the 11800 block of Painter Avenue in an unincorporated area near Whittier about 3:30 a.m. Aug. 28, 2011.

The driver of a gray Scion sedan pulled up in front of the men, pulled out a handgun and fired several shots, the sheriff’s department reported soon after the killings.

Three or four people were in the car.

Investigators believe the victims, neither of whom were affiliated with gangs, may have been mistaken for local gang members who had been at the scene earlier in the night.

Rodriguez’ mother used the news conference to speak directly to the gunman.

“Cesar was going through the right path, so was Larry,” Lupe Rodriguez said. “To the person who did it, I don’t know how you can live, knowing us and we don’t know you.”

Rodriguez had volunteered as an Explorer for four years and become the leader of his local post’s honor guard, working at DUI checkpoints and National Night Out events. Hahn said he was a favorite at the Norwalk station and had applied to be a full-fledged deputy.

Villegas, a graduate of California High School and the Universal Technical Institute, had a job he loved at Caterpillar, according to Hahn. The company had just paid for him to go back to school and get his associate degree. He was raising a 10-month-old son and his girlfriend was pregnant with their second child, a daughter.

Pomona Police Find Over $15,000 Worth of Narcotics During Traffic Stop→ 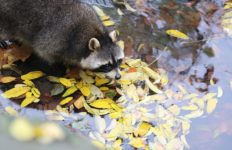