A motorcyclist died after he crashed into a vehicle that was crossing traffic to pull into a business driveway, authorities said Saturday.

The 25-year-old Perris resident on the motorcycle was taken to a hospital, where he was pronounced dead, police said.

The 54-year-old Perris woman driving the vehicle was not injured and was not under the influence of drugs or alcohol, police said. 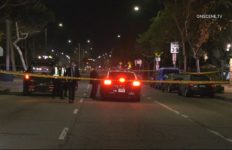 Motorcyclist Killed in Traffic Collision with Truck in Irwindale→