Three Arizona men were charged Tuesday in connection with what police say was a deadly marijuana deal in Garden Grove.

Victor Rene Larios, 29, and Joseph Anthony Ruiz, 27, are charged with murder, with a special circumstance allegation of robbery, as well as attempted murder and robbery counts stemming from the killing of 32-year-old Thien Hoang Phan of Irvine.

All three men are being held on $1 million bail, with arraignment expected sometime Tuesday at the Central Jail.

The shooting occurred about 12:45 p.m. Sunday in the 9600 block of Westminster Avenue, said Garden Grove police Lt. Carl Whitney. A partner of Phan’s who was at the drug deal managed to get away without getting injured and later called police, Whitney said.

Police arrested the three suspects about 1:30 a.m. Monday as they left a hotel in Venice Beach, Whitney said.

He said the trio had done business with Phan in the past. But during the most recent transaction, a dispute over money and the product erupted, triggering the shooting, Whitney alleged.

It was the third drug-related killing this year in Garden Grove, according to the lieutenant, who said there’s been an uptick of criminals from states where marijuana is illegal coming to California where recreational use of the drug is legal.

On April 29, a suspect attempted to rob a drug courier for cash at a stash house for marijuana sales in the 12000 block of Corvette Street, Whitney said. The courier claimed he gunned down 35-year-old Brandon Nicholas Ross in an act of self-defense, Whitney said.

On July 8, 25-year-old Shon Xavier Hall was killed in a home-invasion robbery in the 9100 block of La Grand Avenue, Whitney said. The suspects demanded cash and narcotics from the victim, Whitney said. No arrests have been made in that killing.noc

Driver Gets 30 Years to Life for Deadly Irvine Crash→ 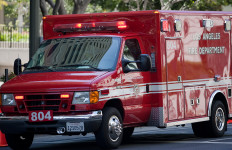 Man Sentenced to 15 Years to Life for Deadly Crash→