Police searched for answers Tuesday morning after three people were detained at the end of a pursuit of a stolen vehicle from Santa Ana to Tustin, near the discovery of a stabbing victim who was hospitalized in extremely critical condition and reportedly later died.

Police said a male in his late teens to early 20s called his mother to say she needed to come to a laundromat near Eastwood and Fairhaven avenues at about 9:20 p.m. Monday. When the mother arrived, she saw her son being assaulted by at least three suspects. When the woman tried to intervene, the suspects took the woman’s car and fled the area, according to Cpl. Anthony Bertagna of the Santa Ana Police Department.

An officer spotted the vehicle and a pursuit began that ended near Prospect Avenue and Norwood Park Place in Tustin, Bertagna said.

At that Tustin location, a man in his 50s or 60s was found suffering from multiple stab wounds, but was likely not connected to the stolen car and pursuit because video from the initial incident in Santa Ana showed all involved parties to be in their late teens to early 20s, Bertagna said.

A stabbing victim in his late teens to early 20s did walk into Orange County Global Medical Center, located at 1001 N. Tustin Ave., in Santa Ana, and was believed to be connected to the original incident. He was reported in stable condition, Bertagna said.

“People were detained,” Bertagna said, but he could not confirm how many suspects were involved. 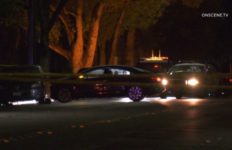