Contrary to the notion that the country’s health care is primarily a privately funded system, 71 percent of health care expenditures in California are paid for with public funds, according to an analysis released today by the UCLA Center for Health Policy Research.

Medi-Cal/Healthy Families expenses take the biggest bite, 27 percent, followed by Medicare at 20 percent. Tax subsidies for employer-sponsored insurance account for a 12 percent of public spending, according to the UCLA researchers.

Given the dominance of public spending in health care, the study’s authors noted that a single-payer system might be more feasible than previously thought.

“For a majority of Californians, a public-run system is already the reality,” said Andrea Sorensen, a graduate student at the UCLA Fielding School of Public Health, who co-authored the study.

“A single-payer system could unite all these various programs and expand them to the entire population, resulting in a more streamlined and cost- effective approach to health care spending,” she said.

The UCLA Center for Health Policy Research is one of the nation’s largest health policy research centers and the premier source of health policy information for California.

L.A. County To Take Over Skid Row Clinic From UCLA→ 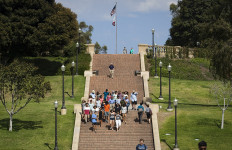