Metro’s Joshua Schank said the system would work in a similar way to Uber and Lyft, with passengers ordering custom trips though a mobile phone application, and would be integrated with its larger system. Metro is issuing a request for proposals to develop a pilot program on Wednesday.

“As far as cost, we see the price point for the service being a less expensive alternative to Uber and Lyft. It will be pooled shared rides only, you can’t have your own personal vehicle, so that makes it a price point that is lower than Uber and Lyft,” Schank said during a conference call with reporters.

Metro officials said previously that the vehicles used in the system would be smaller than a 40-foot bus but larger than a five-passenger sedan.

Schank said a person taking three buses in the morning in a five-mile area may have to wait for each bus and the trip could take 90 minutes, but “now you have a point-to-point option where the service picks you up in 10 minutes and delivers you there directly, and maybe your trip only takes half an hour.” 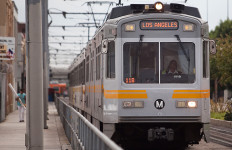