Canadian Prime Minister Justin Trudeau wrapped up his trip to the United States Saturday with a stop in Los Angeles, where he and Mayor Eric Garcetti spoke with reporters at Griffith Observatory and went for a morning hike at Griffith Park.

“This is the largest collection of Canadians outside of Canada here in Southern California and we’re very proud of that,” Garcetti said. “It shows why these relationships are so important at a time when we need to have more bridges and more connections and not more divisions.”

The leaders — both dressed in hiking shorts — touted the benefits of economic cooperation between the two countries, including the North American Free Trade Agreement among the United States, Canada and Mexico.

Trudeau was asked for his thoughts about immigration, one of the most controversial topics for all regional leaders in light of President Donald Trump’s prioritization of the issue in his 2016 campaign and in his administration.

“Canadians know that having a strong [immigration] process — where we ensure security, ensure that people coming are going to be able to be successful — is integral to keeping a strong system,” Trudeau said. “So that’s continuing to be my message on immigration, that we are an open and welcoming country, because it’s our strength. But we ensure that welcoming happens through a process that leads to people succeeding.”

The two men also expressed concern and appreciation for the California Highway Patrol officer who broke his clavicle in a traffic accident in Trudeau’s motorcade Friday after Trudeau spoke at the Ronald Reagan Presidential Library in Simi Valley.

Garcetti said the officer is expected to make a full recovery.

Trudeau was concluding a West Coast swing that included a Friday meeting with Gov. Jerry Brown and Lt. Gov. Gavin Newsom in San Francisco and a meeting with Silicon Valley tech companies on Thursday. 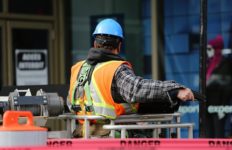 Board OKs Rate Hike for Sheriff’s Services in Cities→