Viola Davis collected her first career Oscar Sunday evening for her supporting role in the big-screen adaptation of August Wilson’s “Fences,” while Mahershala Ali won on his first-ever nomination for best supporting actor in “Moonlight.”

Davis, 51, had been nominated for two previous Oscars, for her lead role in “The Help” and her supporting performance in “Doubt.” But her work opposite Denzel Washington, who also directed “Fences,” finally earned her the statuette.

“You know there’s one place that all the people with the greatest potential are gathered. One place. And that’s the graveyard. People ask me all the time, `What kind of stories do you want to tell, Viola?”‘ she said while accepting the award at the Dolby Theatre in Hollywood. “And I say exhume those bodies, exhume those stories, the stories of the people who dreamed big and never saw those dreams to fruition, people who fell in love and lost.

“I became an artist and thank God I did because we are the only profession that celebrates what it means to live a life,” she said. “So here’s to August Wilson, who exhumed and exalted the ordinary people.”

She hailed Washington and the entire crew that brought to life “a movie that is about people and words and life and forgiveness and grace.”

Ali, meanwhile, took home the prize for best supporting actor for his role in the heart-tugging coming-of-age saga “Moonlight.”

“I want to thank my teachers, my professors,” he said while accepting the award. “I had so many wonderful teachers, and one thing that they consistently told me … is that it wasn’t about you, it’s not about you. It’s about these characters. You’re a servant. You’re in service to these stories and these characters and I’m so blessed to have had this opportunity.”

Ali, 43, praised director Barry Jenkins and his fellow cast and crew members, but he gave particular praise to his wife, Amatus Sami-Karim.

“Lastly, I want to thank my wife, who was in her third trimester during awards season. We just had a daughter four days ago. I just want to thank her for being such a solider through this process and really carrying me through it all.”

The anti-superhero film “Suicide Squad” scored an Oscar for makeup and hairstyling by Alessandro Bertolazzi, Giorgio Gregorini and Christopher Nelson. The spinoff from the world of Harry Potter, “Fantastic Beasts and Where to Find Them,” earned a costume design Oscar for Colleen Atwood. It was her fourth career Oscar, previously winning for “Chicago,” “Memoirs of a Geisha” and “Alice in Wonderland.”

The ESPN film “O.J.: Made in America,” tracing the rise and fall of O.J. Simpson, was named best documentary feature.

“Arrival” won for best sound editing for Sylvain Bellemare, while the prize for sound mixing went to the “Hacksaw Ridge” team of Kevin O’Connell, Andy Wright, Robert Mackenzie and Peter Grace. The win for O’Connell was his first — in an astonishing 21 career nominations. He gave thanks to his late mother, saying she told him to work hard so someday he would be able to thank her from the Oscar stage.

“Mom, I know you’re looking down on me tonight, so thank you!” he said. “Thank you all so much, I really appreciate this.”

The musical “La La Land” went into the night with a record-tying 14 nominations, with hopes of possibly breaking or tying the record of 11 Oscar wins set by “Ben-Hur,” “Titanic” and “The Lord of the Rings: The Return of the King.” But the film suffered three early losses in the sound editing, sound mixing and costume design categories, ruining its hopes for a record night.

Justin Timberlake kicked off the ceremony with a choreographed musical performance of his Oscar-nominated original song “Can’t Stop the Feeling” from the film “Trolls.” Host Jimmy Kimmel then got right to the politics of the night, noting that the ceremony was being viewed by millions of people “in 225 countries that now hate us.”

My opening monologue from the 89th #Oscars… @TheAcademy @ABCNetwork pic.twitter.com/rXNU8aZfcd

He joked that the country may be divided, but he wasn’t going to be the one bringing it back together.

“There’s only one `Braveheart’ in this room, and he’s not going to unite us either,” Kimmel said, gesturing to a chuckling Mel Gibson in the crowd.

Kimmel later gave special praise to Meryl Streep, who delivered a much- publicized anti-Donald Trump speech at the Golden Globe Awards in January, earning her a sharp rebuke from the president, who called her “overrated.”

“Meryl Streep has phoned it in for more than 50 films,” Kimmel said. He then prodded the crowd to give Streep “a totally undeserved round of applause,” bringing the audience to its feet.

Jimmy Kimmel called Meryl Streep “overrated" and made everyone give her a “totally undeserved" standing ovation https://t.co/wgZQ3hBkVE pic.twitter.com/7nE0mBDFIQ

In one of the night’s more inspirational moments, former NASA mathematician Katherine Johnson, 98, who was portrayed by Taraji P. Henson in “Hidden Figures,” was introduced by the film’s three female stars — Henson, Janelle Monae and Octavia Spencer. Johnson was brought onto the stage in a wheelchair, again bringing the Dolby Theatre crowd to its feet. She smiled broadly and gave the crowd a simple “thank you.” 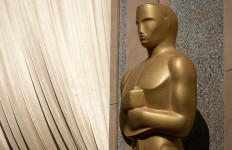