MSNBC is being hailed after admitting it made a mistake in firing Sam Seder as a paid contributor over a sarcastic 2009 tweet involving rape and Roman Polanski.

The tweet, since deleted, said: “Don’t care re Polanski, but I hope if my daughter is ever raped it is by an older truly talented man w/a great sense of mise en scene.”

In a statement, MSNBC president Phil Griffin said: “Sometimes you just get one wrong — and that’s what happened here.”

He said the networks made its initial decision for the right reasons — “because we don’t consider rape to be a funny topic to be joked about. But we’ve heard the feedback, and we understand the point Sam was trying to make in that tweet was actually in line with our values, even though the language was not. Sam will be welcome on our air going forward.”

The 2009 tweet came to light after pro-Trump radio commentator and blogger Mike Cernovich made an issue of it.

Even Cernovich, an Orange County resident, celebrated the course-reversal on Seder, 51, a comedian, actor and director.

“I’m thrilled MSNBC has made the decision that people shouldn’t be fired over satirical tweets,” he said Thursday. “This rule will surely be applied equally to all sides, and if it’s not, we will bring Sam Seder’s Tweet out every time the media goes after someone else for a Tweet.”

Before being welcomed back, Seder told EW: “We tune in to news companies for them to give us some sense of grounded assessment of what the truth is. 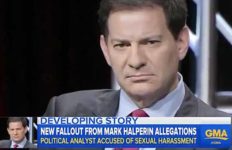