For the second designer showcase at the historic Wattles Mansion in Los Angeles, 16 design teams tackled the theme “Hollywood History: The New Classics.” The designers injected contemporary touches into the home’s rooms while preserving its classical architecture and period details. A Mission Revival masterpiece designed by Myron Hunt and Elmer Grey, the home was built in 1908 for financier Gurdon Wattles. The decorated rooms are not intended to create a unified interior but instead independently showcase each designer’s personal interpretation of the theme.

Today the landmark home, with 47 acres of botanical gardens, is considered a local treasure. It is owned by the city, is available for tours and can be rented for special events. The showcase event benefits charities that include No-Kill Los Angeles (an initiative of the Best Friends Animal Society), Save Iconic Architecture Projects and the Los Angeles Parks Foundation. Hire a Los Angeles Interior Designer.

Designer Ron Woodson filled the living room with eclectic furnishings. He livened up the original wood-beamed ceiling with a painted design.

BEFORE: The living room had a tiled fireplace and an abundance of wood, but otherwise provided a blank canvas for Woodson to decorate.

AFTER: A comfortable sectional faces a stunning view of the front lawn, Wattles community garden and the city beyond through a large window framed by stately draperies and wooden candlesticks. A mix of historic and contemporary art adorns the walls, including a large painting of actress Norma Talmadge, which was found in storage by the Los Angeles Department of Recreation and Parks and restored for last year’s showcase.

A marble-topped cook’s table with chrome legs and shelving maintains the traditional feel of the mansion’s kitchen. Across from it, a classic black range from the French manufacturer La Cornue was installed for the 2016 designer showcase.

Designer Kelley Jackson says her space tells the story of a “bold and elegant woman who collects and supports local artists and locally made furniture and furnishings.” Jackson’s choice of a “strong but pleasing pink,” California furniture from the 1920s and ’30s, a glamorous mirror and period artwork by California artists depicting Los Angeles locations give the lounge a strong sense of place.
Choosing the perfect pink tone was a challenge, and her inspiration came from the Spanish Revival homes of Hollywood legends like Will Rogers.

Design team: Melinda Ritz and Mae Brunken, on behalf of the Set Decorators Society of America

Designer Mae Brunken says her team transformed a traditional bathroom into an eclectic lounge for a man who “appreciates classic architecture but wants a modern lifestyle.” Their inspiration came from vintage barber shops combined with modern-day comforts.

Kym Rodger melded historic details with contemporary elements in the master bedroom. She used traditional materials such as velvet, wool, silk and embroidered fabrics, along with antique glass reminiscent of the early 1900s and of-the-moment clean lines.

Rodger’s inspiration was a painting of a lady in bed. “I loved how the sheets draped over the bed, so I painted a close-up of sheets and collaborated with Mayflower Wallpaper to create the wallpaper that you see on the walls. You are essentially sleeping amongst layers of fabric.” Wallpapers That Take a Room to Another Era.

Rodger used a velvet chaise and added crown molding and plaster relief on the ceiling for glam appeal. She designed the space as if for one of her clients, who “like to feel they are staying in a five-star hotel suite.”

With plenty of plants and serene furnishings, designer Leslie Shapiro Joyal’s says her main goal was to “make people happy.” She dedicated the space to her mother, an animal lover, and said her inspiration and starting point was the bronze sculpture of a girl holding a bird (seen at left in this photo). With the loggia’s location between two dramatic interior spaces (the living room and dining room), she wanted to create a “little bit of a pause when you come through this space, almost like a palate cleanser. You come in, you get a whiff of pretty and then you go back into drama,” Shapiro Joyal says.

The designer “let the space organically evolve,” she says, and populated it with vintage olive green velvet chairs, French pots, a marble-topped coffee table and chairs with wide seats.

Weekend Design: A Hollywood Landmark Gets All Dressed Up was last modified: April 1st, 2017 by Contributing Editor 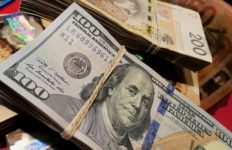 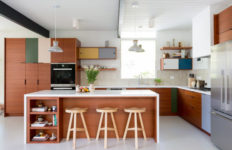 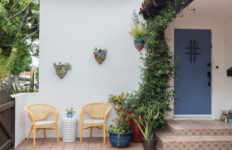