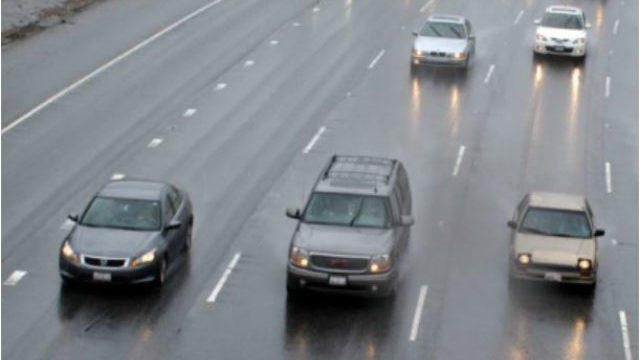 Rain will make a comeback in the Southland this week, with two storm systems out of the Pacific Northwest headed for the region, the National Weather Service said Monday.

Light rain may fall Monday evening followed by showers Tuesday, producing a quarter-inch of rain at the start of what promises to be an “unsettled week,” said NWS meteorologist Rich Thompson from his monitoring station in Oxnard.

But a “much stronger” storm is expected to douse the region Thursday and Friday, generating rain and snow in the San Gabriel Mountains, he said. Predictions regarding that system are still being developed, but the NWS said it could trigger mud slides and debris flows down slopes previously stripped of vegetation by wildfires, along with treacherous mountain driving conditions. Precipitation could be heavy at times Friday or Saturday, according to the weather Service.

The system that went through the region over the weekend, producing hours of light, steady rain on Saturday, generated between a half-inch and an inch of rain, Thompson said, adding that it came out of the northwest but was augmented by an infusion off moisture from the southwest.

Cloudy skies are expected in L.A. County Monday, along with highs mostly in the low 70s, followed by precipitation every day from Tuesday through Sunday. Tuesday’s temperatures will be several degrees lower than Monday’s.

The NWS forecast mostly cloudy skies in L.A. County Monday and highs of 62 degrees on Mount Wilson; 67 in Avalon; 68 at LAX; 69 in Palmdale and Lancaster; 70 in Long Beach; 71 in Downtown L.A.; 72 in San Gabriel and Pasadena; 73 in Burbank and Saugus; and 75 in Woodland Hills. Temperatures will be up to six degrees Tuesday, then continue to decline. Precipitation — in the form of rain or showers — is forecast from Tuesday through Saturday.

Partly cloudy skies were forecast in most Orange County communities Monday — although Yorba Linda and Fullerton are expected to be sunny — and highs are expected to be 63 in San Clemente; 65 in Newport Beach; 66 in Laguna Beach; 72 in Anaheim and Irvine; 73 in Yorba Linda; and 74 in Fullerton. Temperatures will be about the same Tuesday, but precipitation in the foirm of rain or showers are expected from Tuesday through Saturday.