A 29-year-old Santa Ana man was in custody Monday on suspicion of triggering a deadly police pursuit while allegedly driving drunk in Garden Grove.

Dagoberto Orepeza was speeding on the Santa Ana (5) Freeway about 1:30 a.m. Sunday when he refused to obey an officer trying to pull the 2000 Honda Accord over just south of the Garden Grove (22) Freeway, according to California Highway Patrol Officer Florentino Olivera.

The pursuit lasted just a few minutes with the car slamming into a Toyota Camry near the Chapman Avenue off-ramp and careening into a utility pole and concrete wall, Olivera said.

The Honda exploded into flames, and thanks to two officers, a sergeant from the CHP and the other from Garden Grove police, Orepeza and two of his passengers were rescued, Olivera said.

Addison Villa, who was 21 and lived in Santa Ana, was pronounced dead at the scene, according to the Orange County Sheriff-Coroner’s Office.

Adilene Chavira, 19, of Santa Ana, was also at that hospital being treated for major injuries, Olivera said. Another passenger, 22-year-old Saul Chavira of Santa Ana was taken to Mission Hospital in Mission Viejo, Olivera said.

“As the car was catching on fire, they got out their fire extinguishers and tried to put it out while at the same time rescuing the driver and passengers,” Olivera said.

At some point “the flames got too hot” and they could not save Villa, Olivera said.

“If not for the CHP sergeant and Garden Grove police officer we would have had four dead,” Olivera said.

Orepeza was arrested on suspicion of drunken driving and felony evading, Olivera said. 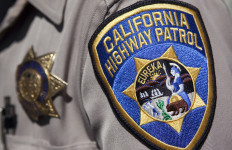 Motorcyclist struck, killed on I-5 by woman suspected of drunk driving→